While on the look out for new things to make a few months ago, I was playing the CCG Hearthstone. One weapon card available is a weapon called Gorehowl, a rather large orc axe and the card image and text got me curious (this is the second WOW prop I have made). I started looking for reference images and had gathered a few before I found this version by Kamui Cosplay.This and reading Bill Doran’s new Foamsmith book was pretty much my inspiration for making it from foam, plus I have only made one foam prop before. It also used worbla which I hadn’t used before and wanted to give it a go. A blueprint was then made using some of the reference images and then scaled and printed.

I plan on adding and changing something to make it my own such as more swirls cut into the axe head and angular spikes. 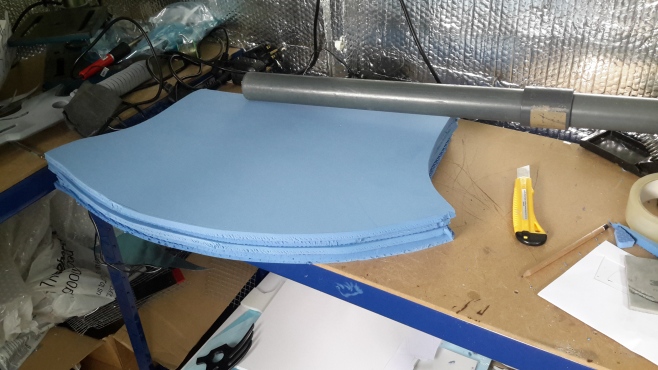 I started by cutting some basic axehead shapes using the blueprints from foam floor mats and then removing the texture on the back with a beltsander. They were then glued together using contact cement. 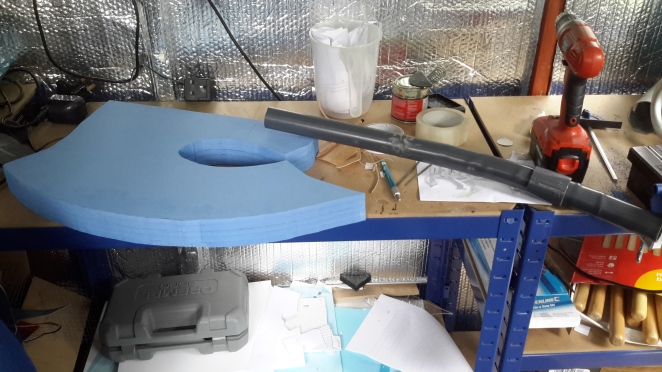 I redrew the axehead on the top layer of foam and cut it out on my band and scroll saws.  The handle was made from 5cm/2 inch PVC tube which was heated and bent into shape. This did create some small creases but these would be covered later.The tube was made from 2 short lengths of tube joined with a connector after having had some trouble finding metre lengths of PVC tubing (most were 3 meters or more). It was sharpened at either end using the sanding drum on my dremmel and pushed into the axehead. 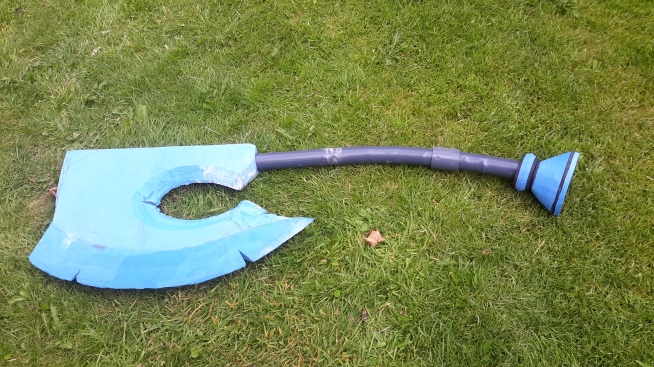 The main blade edge was done with a beltsander, while for the inner ones I used a utility knife. I did make a mess of of some of the bevels by not using a sharper knife. It may have been best to redo the axe head but had used quite a bit of glue and didn’t want to spend time making another. I hindsight I should have done this as I would have some trouble later because of this… 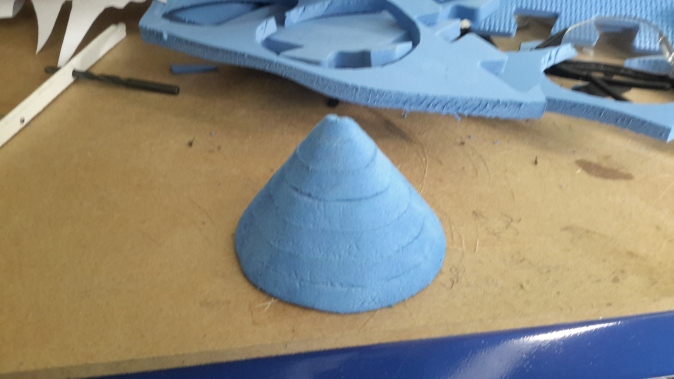 The skullsmasher on the bottom of the axe was also made from layered foam and beveled by adjusting the angle of the platform on the disk sander. 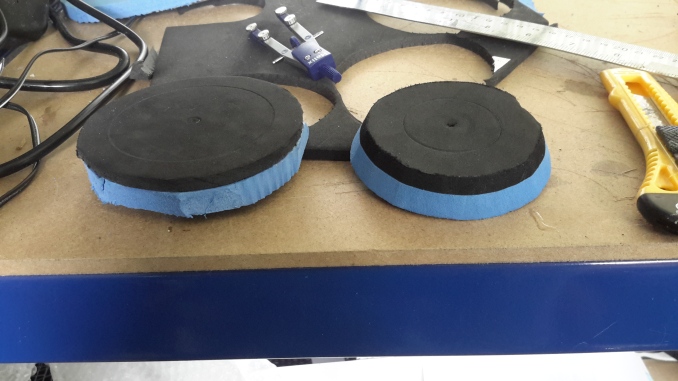 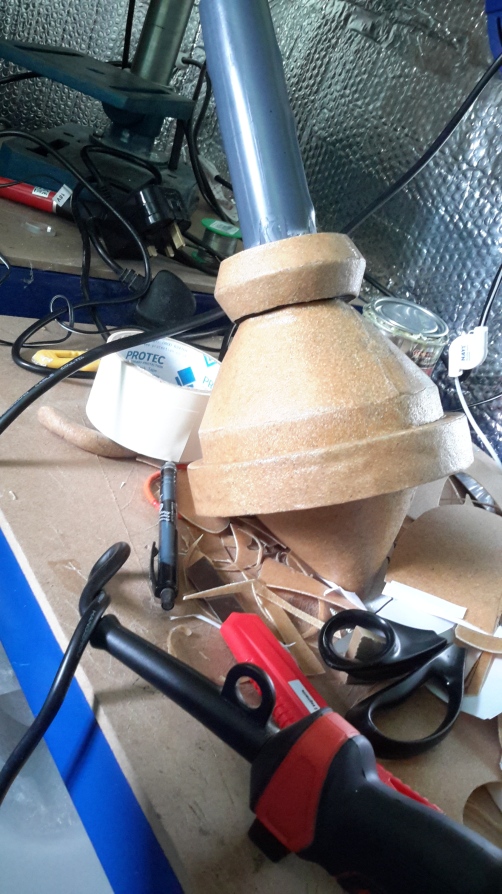 When assembled the whole thing was covered in worbla to make it incredibly sturdy. Tusks were also made from worbla by heating and rolling out some scraps. They were then heated again, shaped and then attached. The first 4 were done symmetrically, some of the others were added at angles or spaces left to show battle damage. 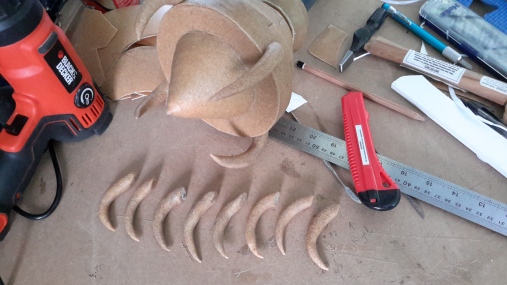 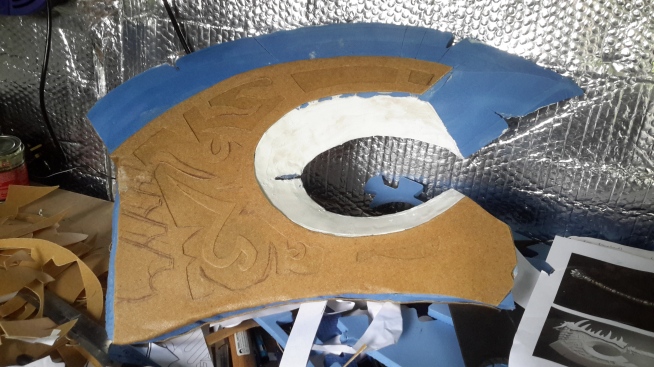 The main body of the axehead was covered on worbla to give it a hard surface and then details were added over the top. The errors on the inner blade were covered using caulk and then smoothed. I had never used this before and didn’t realize I couldn’t sand it and left it rough

I then had to add more coats to cover this up. It would have helped if the foam had be cut with a sharper knife, but I know this for next time. 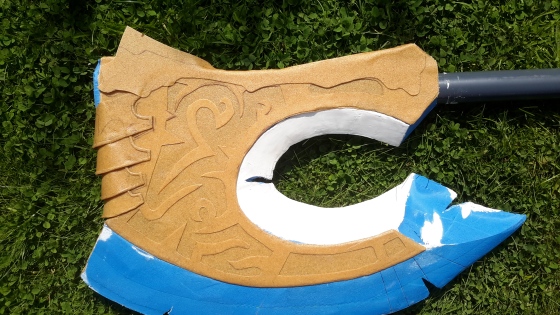 I had some issues making the curved plates on the top; attaching another would heat the previous one a warp it. Doubling them up might have helped with this or as I learned from one of Kamui’s books, adding thin foam between two layers. These were the first back spikes I made by cutting out a basic shape then using a dremel to try and shape them. I wondered how they would turn out without covering them in worbla….this didn’t turn out very well. If I make make stuff from foam I’ll need more practice at doing this. The second attempt worked a little better, although to blend and attach them with the rest of the axe I did cover them in worbla. A thought also occurred while covering them – why not try and shape some worlba over the skull I made. 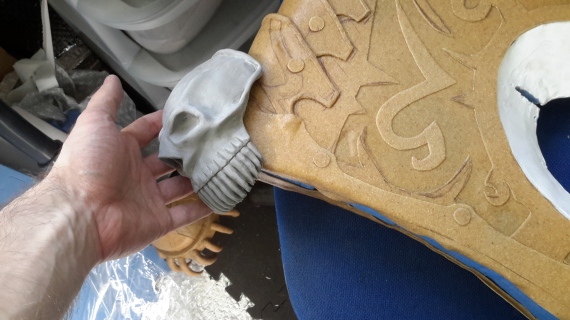 Another reason for doing this build was the chance to sculpt a skull for the top which I really enjoyed. I first used foil to make sure the skull would be the right shape and size. I then built up the skull using sculpey. After baking it I cut two pieces of worbla and worked them over the top of the skull, one for each side these were then joined later. As an experiment to stop the skull warping while joining and attaching it I used fibre glass to reinforce the inside. I was then able to attach it with no issue.

The rivets on the axe head and skull smasher were first made from worbla disks, but I wasn’t happy with these and decide to mold and cast some screw covers in resin which looked a lot better. I had some issue with the resin I was using where it would set, even trying two different types of silicone. This delayed the project a bit until I just used a two part epoxy glue. This worked really well, but I want to experiment with other resins and liquid plastic.

After a lot of testing with different sealers I used epoxy resin to give the blade a good edge, while the rest was covered in gesso. The whole thing was painted with dry brushing, building up the colours starting from dark chocolate brown to iridescent silver for the edges.A few others colours such as a dark patina and bronze were lightly added between layers to break up the silver. This is a method I picked up from a video by punished props and is now my preferred method of painting metal. The weathering was built up starting with a watered down light brown to a dark brown: this helped to break up the metal. 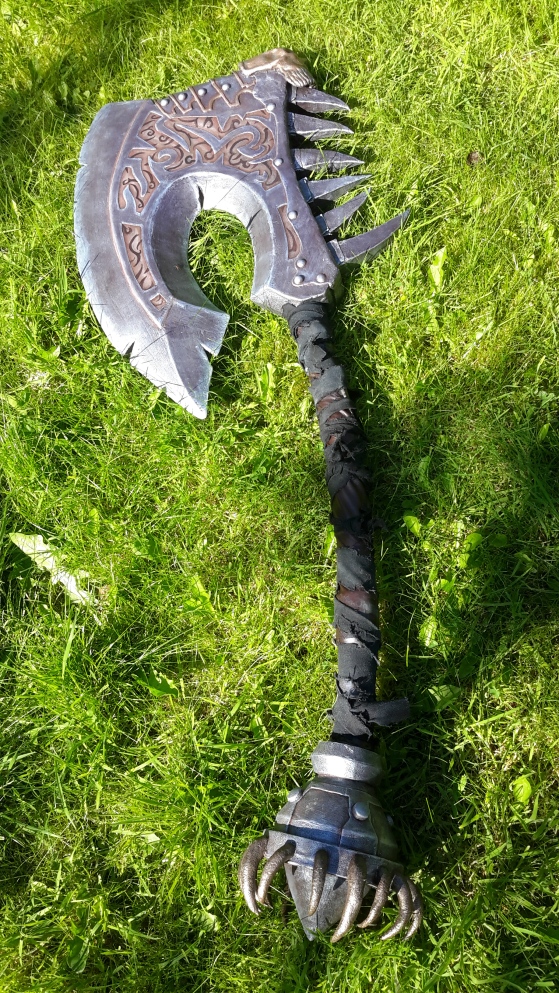 The handle was covered in a dark chocolate coloured leatherette using hot glue to secure one edge it was then twisted to stop it being flat and then sown with thick black thread. For the second layer I used some pretty heavy black cotton fabric with a nice weave to give the handle grip. This was torn into several strips , attacked with scissors and sand paper to give it some wear. It was then roughly wrapped around handle, pulled tight and then knotted. 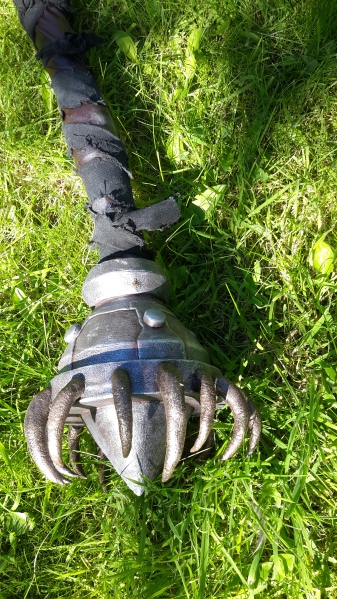 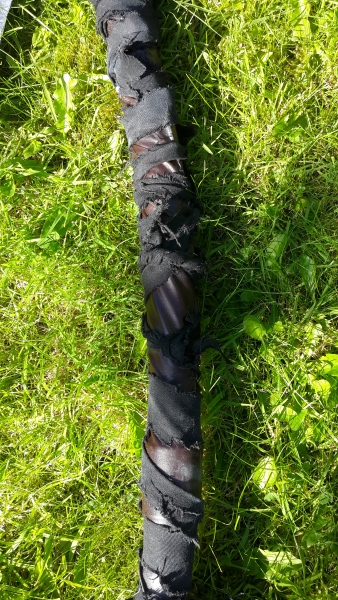 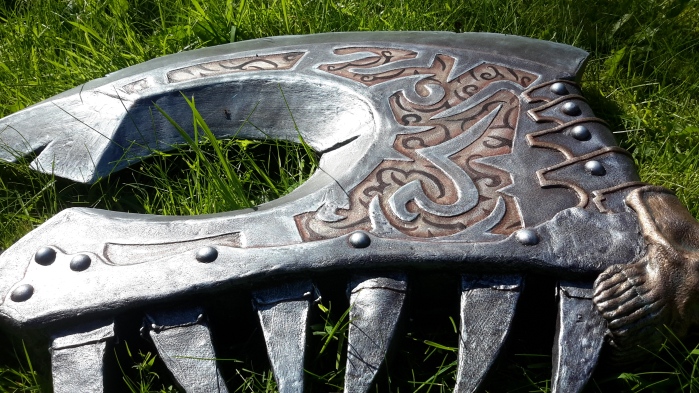 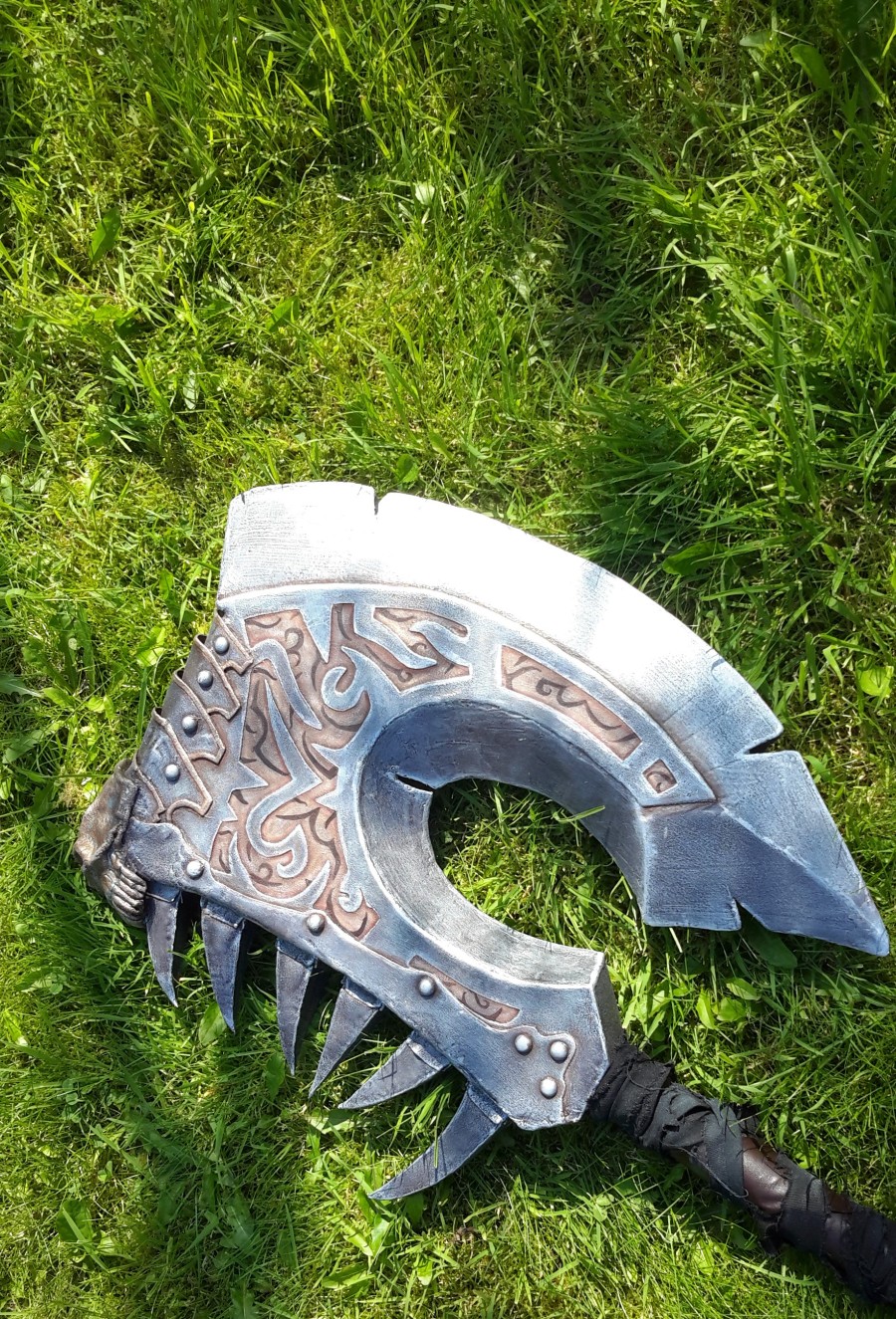 To finish it I just need to give the fabric some weathering (which I probably should have done before I attached it) and test some swirls on the bronze inlays on the axe head.

The main things I learned during this project:

Apart from the issues with filling and casting I really enjoyed making this and want to experiment with more worbla in the future.