Although I’d been working on things over the past few weeks, I had begun to feel a little aimless when it came to future projects. So, during the week, I began putting down some ideas in a new sketch book and watching some other makers on You Tube. This really helped and by Saturday, I had quite a few ideas planned and was raring to go.

First though, I would work towards finishing projects I had started.

I began by painting my spaceship made from scrap plastic. The original idea to colour it dark bronze went out of the window, when I found that somehow the spray can had rusted. Well not the whole can, just the seal.

Paint job 2 involved coating it with chrome followed by a wash of brown ink. When dry, I used my finger to rub the ink of any raised edges. The front window and engines were then picked out in black. While it didn’t turn out how I had it in my head, I was still happy with the result.

After coming to a dead-end on the second axe head, I spent some time researching and doodling some designs. The final one I chose was a simple L shaped knot and a Celtic knot. After transferring the design to the axe, I used my Dremel to remove some resin. I then went onto using needle files to tidy and crisp up the design. It is looking great, but is going to need a bit more work before it’s done.

The final thing I did was a test mould of one of the intricate panels from Mjolnir. This was a test to see how well silicone would pick up the details, and I was impressed how well it worked.

Next week I plan to:

Recently I purchased some foam clay to try out. This is air drying modeling clay that when dry, has similar properties and feel to EVA foam.

My first impression of the clay was that it felt like, mmm, a more plastic-like wall tack, but after some kneading, it becomes more like a normal clay. While I haven’t yet tried sculpting anything from it, I have experimented with pressing it into some of my mask moulds. The aim of which was to see if it could be used to create lightweight foam versions of masks or other props.

Two final things of note were that the clay in direct contact with the mould was still a little moist/soft and had left some residue on the silicone. It maybe possible that it was inhibiting the drying process and some mould release may prevent this. At this stage all but a thin layer was firm, and I was able to remove the mask and let it fully dry out.

The final product is really lightweight and feels very much like EVA foam. It is firm, but flexible and is not too soft as to bend out of shape when handled. It also picks up and holds detail really well.

I will be doing some more experiments with this in the future, including painting up the test masks and trying to sculpt with it.

The past few weeks have been spent working on my synth arm and I have now almost completed it. There are still a few more details to add to the top of the upper arm, then I’ll sand and fill any parts that need it. I can then stick it all together and get it painted.

Next week I’m going to make sure my plague doctor costume is ready for a con the week after that, before continuing with the arm. 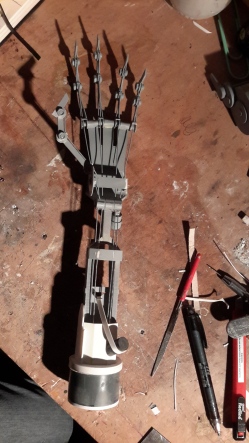 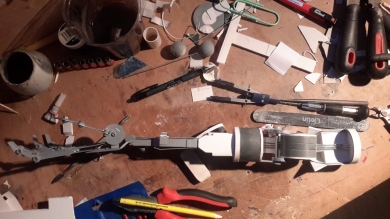 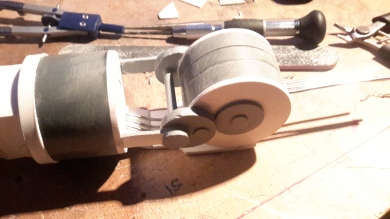 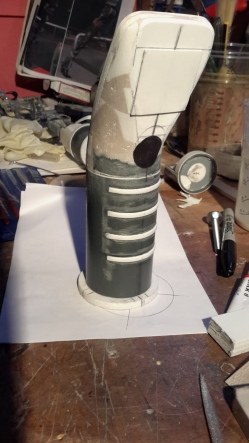 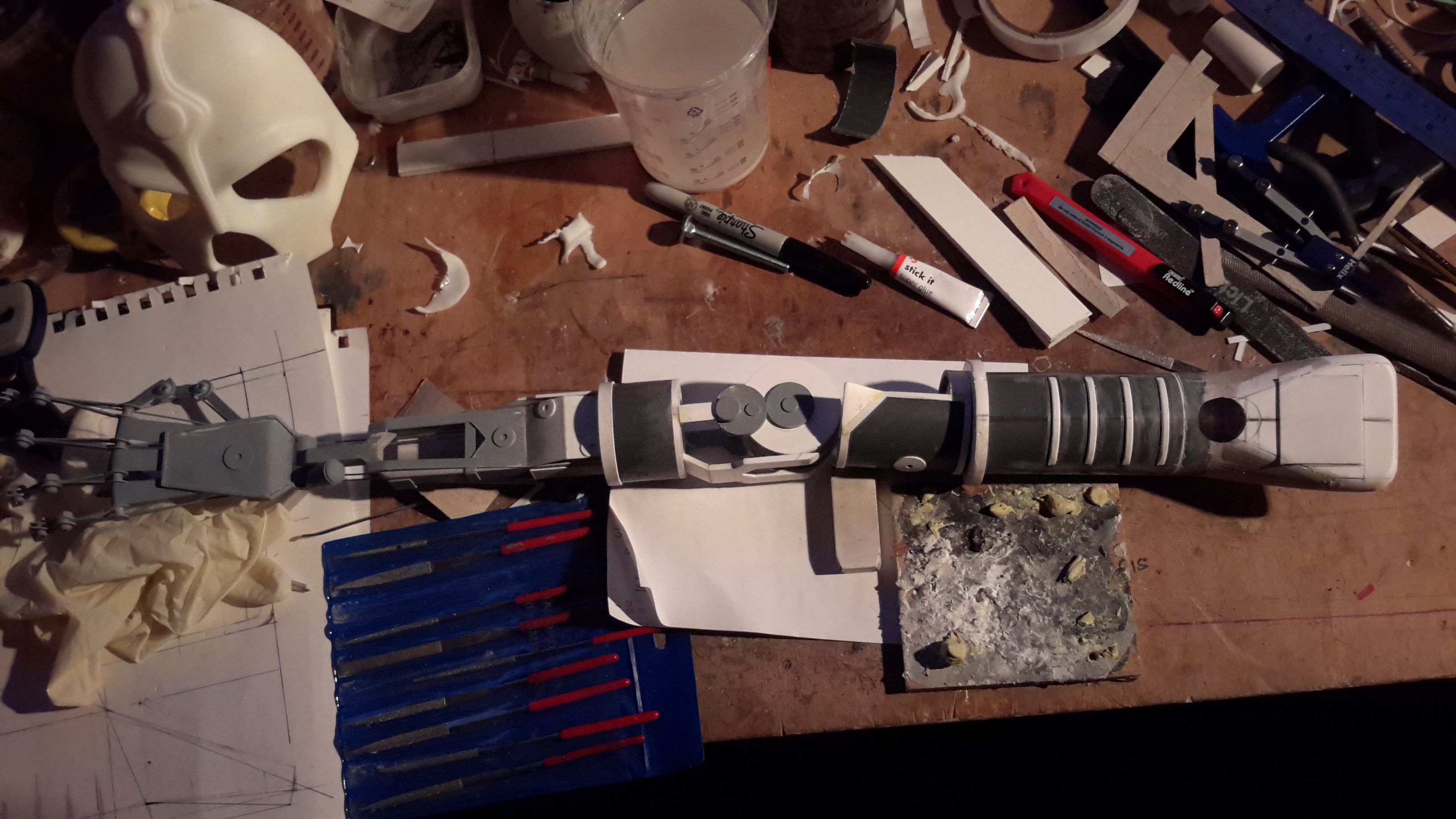 So far in October I have been working on a mix of different things. It began with a character sculpt.

With Dust and Elysian Tail recently coming out on the Switch I began playing the game again and realised I hadn’t done a Dust character sculpt for quite some time. Thinking on which character to do, I decided to do another Fidget – this time by herself. For the sculpt I choose my favorite pose from screenshots I had taken in game and planned out the model. This time I had a play with the proportions which are different from the art work, and I am happy with the way she turned out. Although I deviated from the art for the sculpting I tried to emulate it with the painting, brushing on shadows, highlights and black cartoon outlines.

I have also been working on creating my own version of Mjolnir based on historical pendants. I have the shape but am having difficulty with the rest of the design. For the moment I have come to a bit of a block on this and have put it to one side. 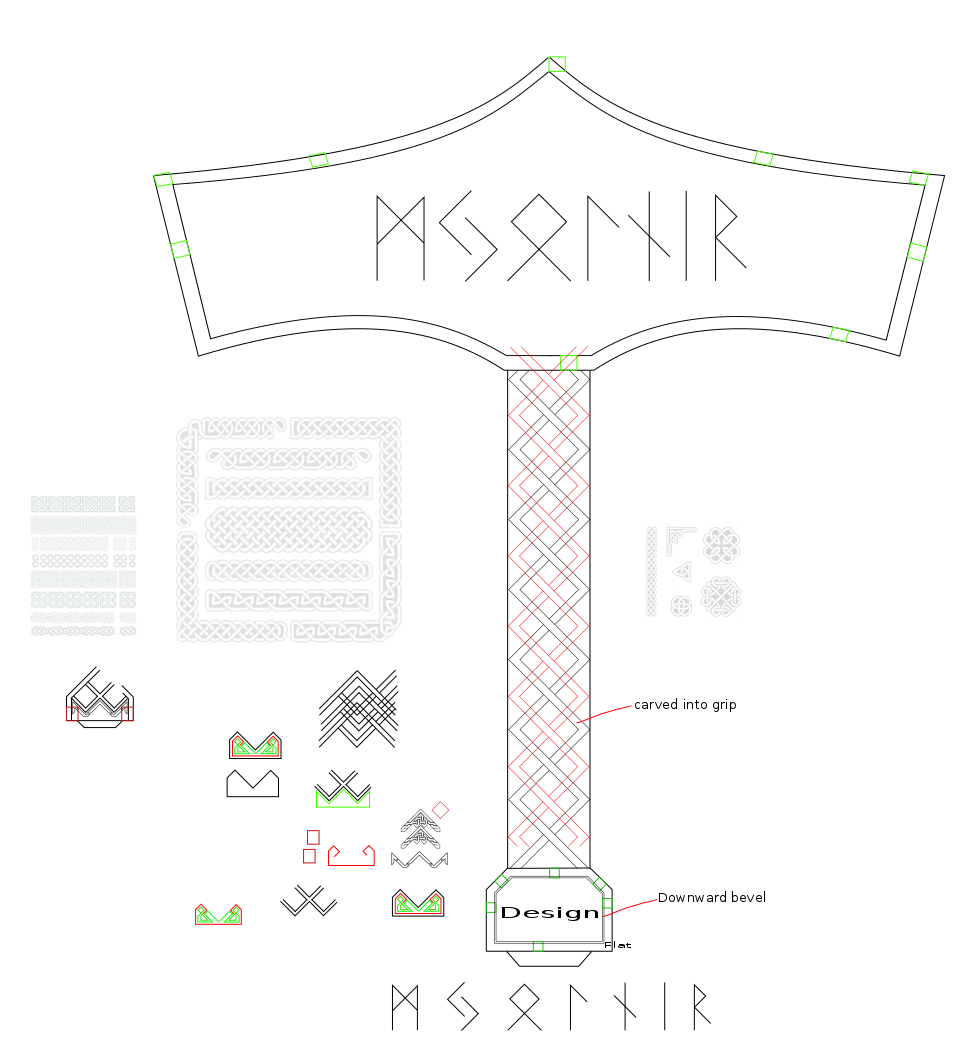 Since I stopped working on the hammer design and couldn’t decide on what other prop weapon I might want to make, I chose to start on something a bit different: parts of a gen 1 Synth from Fallout 4. So far using many screen shots I am beginning to plan and put together an arm. This will mostly be made from styrene plastic, foam PVC and 3D printed parts. When this is done I aim to do the head and neck, then may be even the rest of the body. 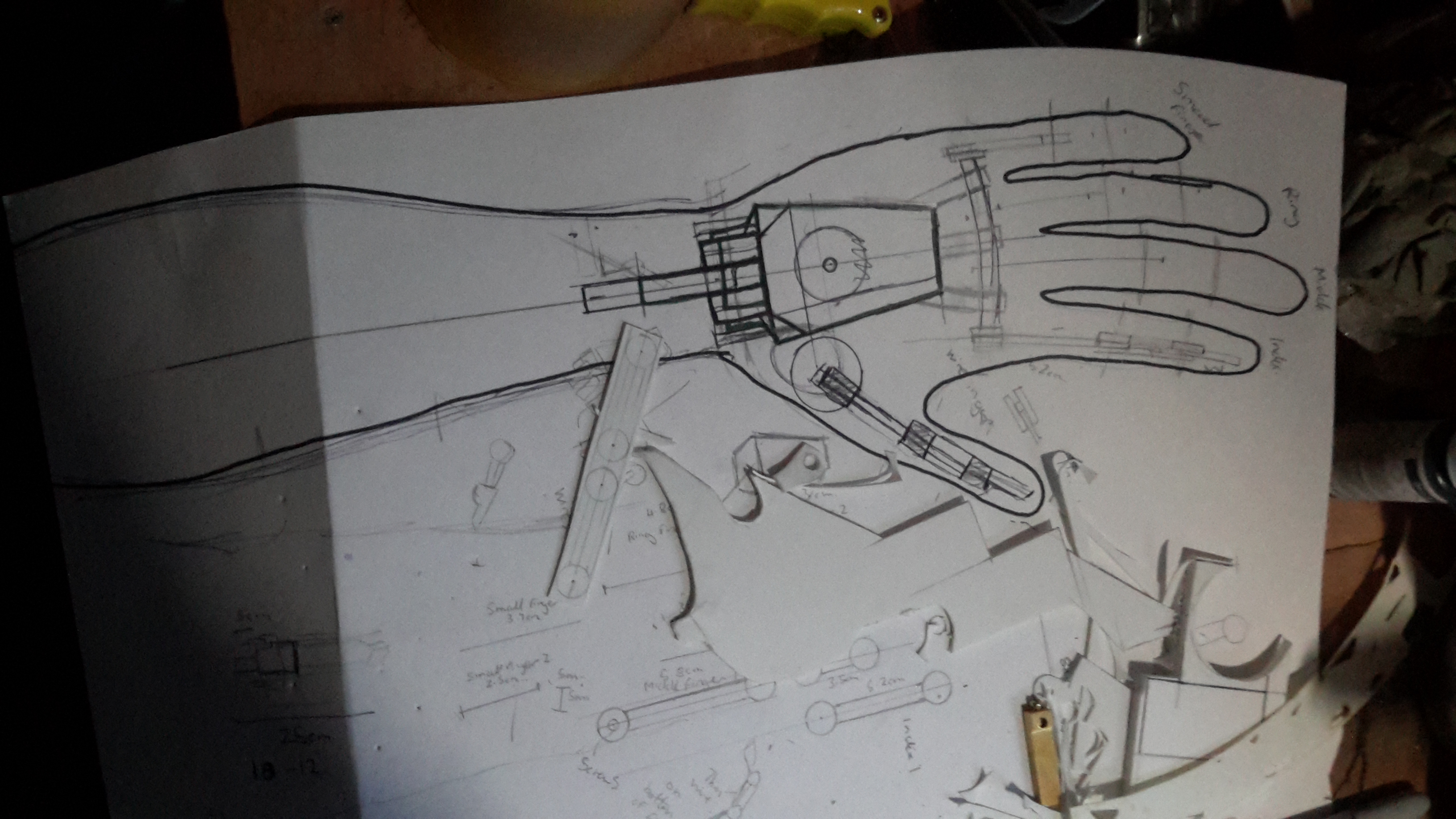 While I haven’t posted for a while, I have been keeping busy working on a few different projects. These include making some variations on my old man Noh mask, drawing a few more plans for my store, a sculpture and trying to finish off some old prop weapons. The main thing I have been working on is getting a costume ready to wear for a con in November…..

I have, for the moment, put the Nox costume that I started earlier this year on hold in favor of finishing one that is a little easier. About two years ago I planned out a Plague Doctor character that took inspiration partly from medieval plague doctors and partly from Eileen the Crow from Bloodborne. I made a faux leather hat, trench coat and aluminium mask (though this proved to be uncomfortable to wear). This was forgotten about in favor of making prop weapons and then later, by my Solaire costume and then the Nox costume.

I choose this to come back to this one for two reasons:

As can be seen in the below images, the costume is coming together nicely and is now more or less done. When it is, I plan on doing a full write up of the whole thing giving information on how each part was made. 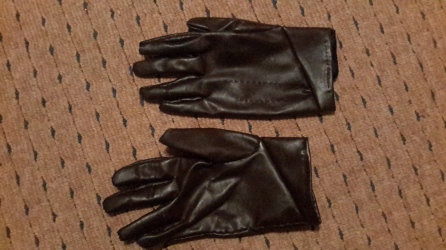 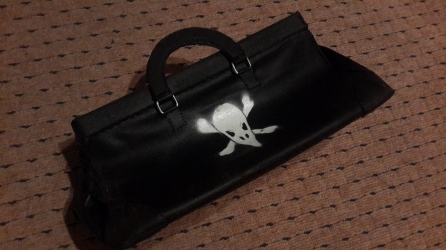 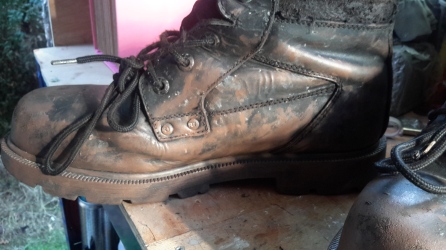 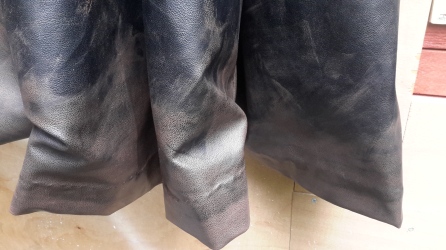 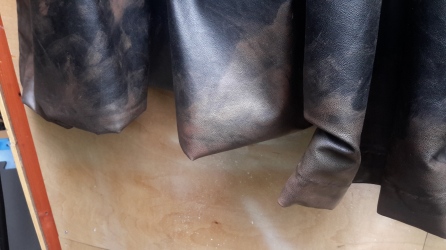 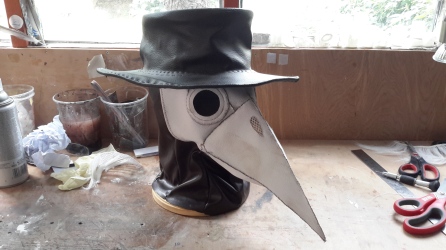 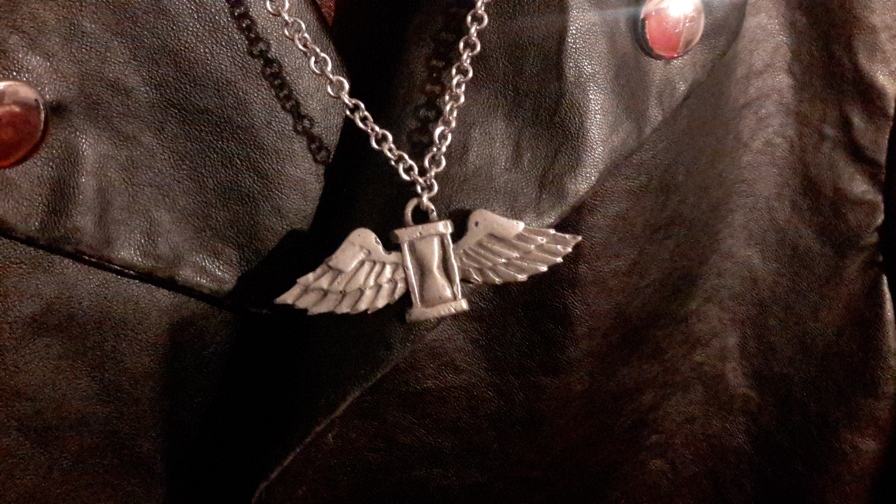 Since my last post, I have been busy working on more projects. I have added my Darth Nihilus mask to my Etsy store and completed 2 other projects from my previous list:

1. The Makonde dagger for the punished props 250k subscriber challenge. The build write up can be found here 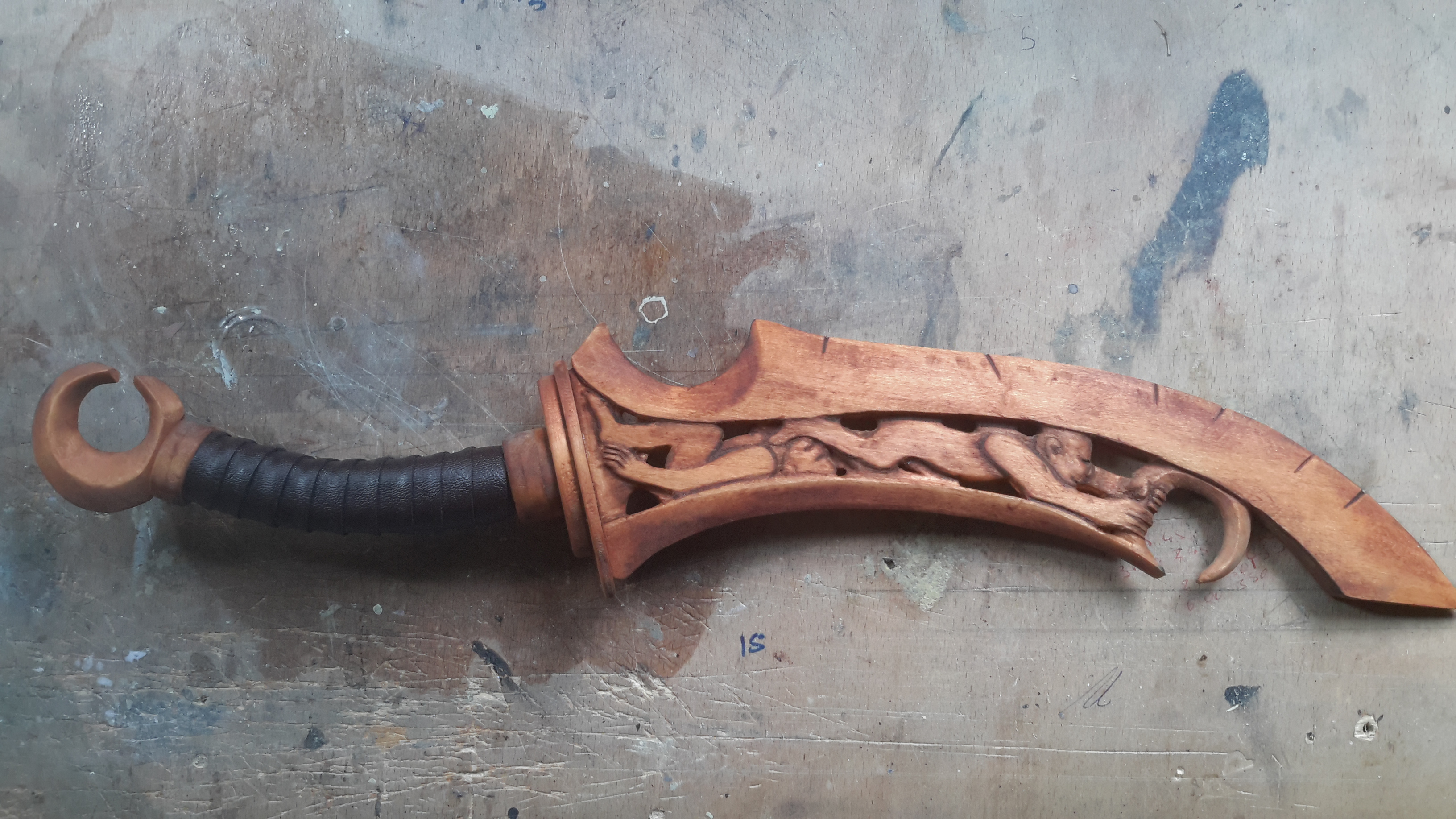 2. I finished sculpting my old man Noh mask, cast and painted it. As with my previous mask I have cast up a few extra, making each a variation on mine that I intend to put up on my Etsy store page. I have also added a tutorial to my website on how I made my masks which can be found here. 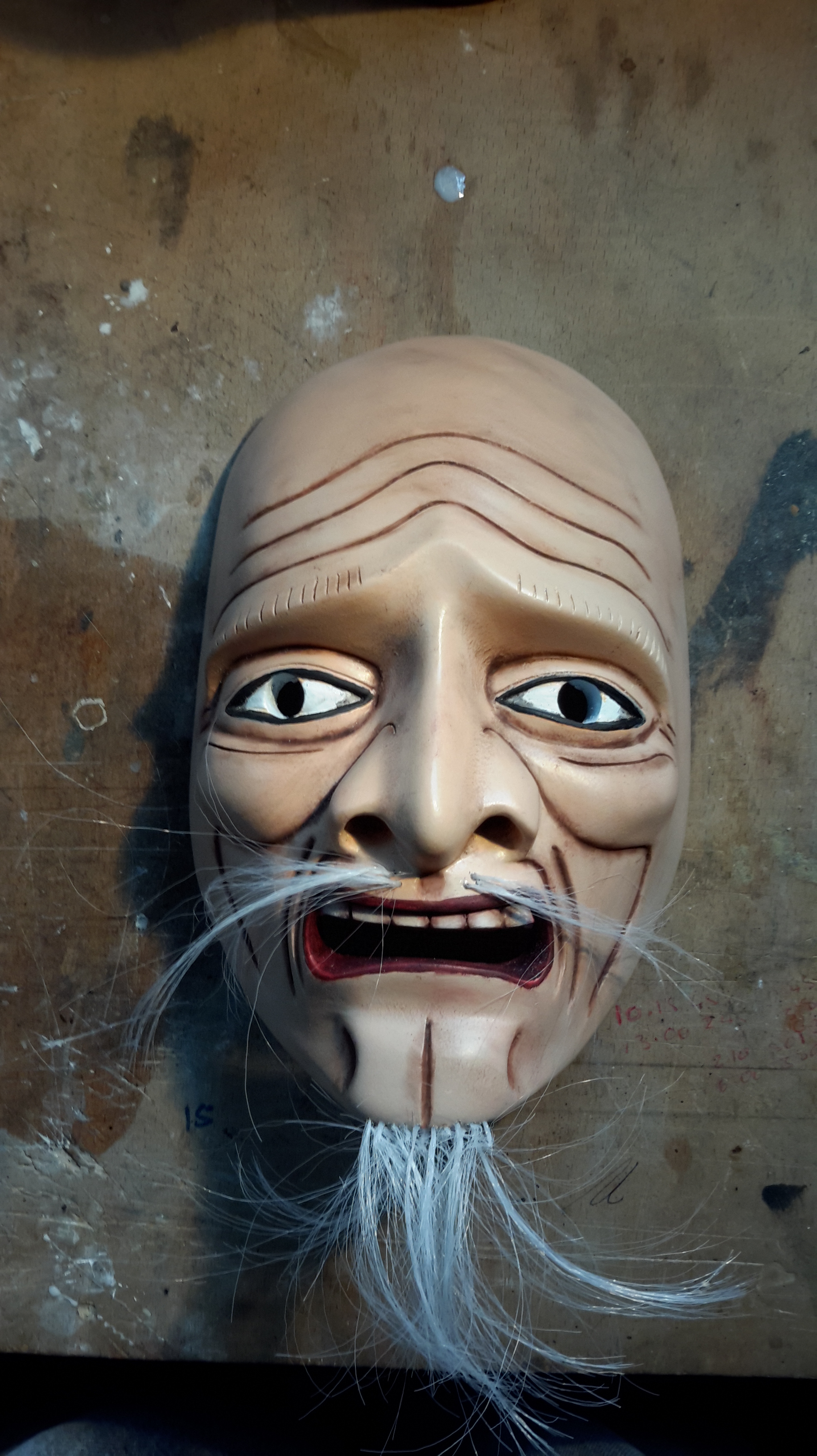 Next I plan on doing some more work on a costume, doing another mask, and maybe a figure or character sculpture. It would also be nice to work on new weapon prop or my printed sword.

All four of my Darth Nihilus masks have now been completed. As I’m holiday in two weeks, so I will put them up on my store then. That way I can work out postage costs and packaging, then send them out as they are purchased. Please check my Etsy store page . 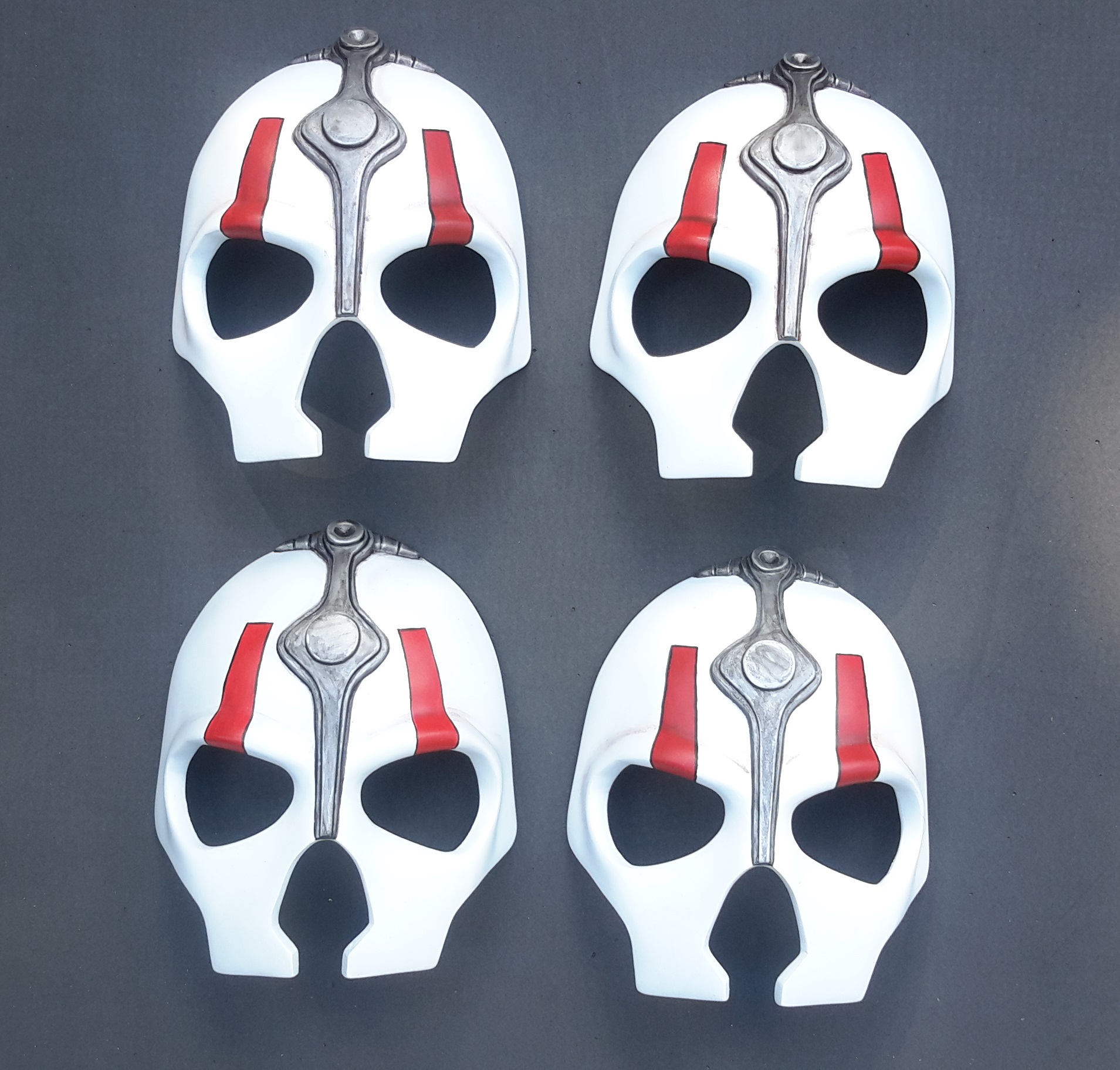 I have a few things I want to work on next:

I haven’t posted for a while as most of June has been spent working on my new costume and moulding/casting and painting up a set of Darth Nihilus masks.

With the modified first mask ready, I created a new mould and tried my hand at slush casting using Smooth-On 300 resin. This is the first time have I tried this and used far too much resin on the first attempt. Taking a moment, I worked out how much resin to use, but still had a few problems due to the eye-holes and the shape of the mask. Eventually I got the hang of it and cast up four good copies which I have sanded and started painting. These will be painted in the original white/red and silver and I plan to put these up on my Etsy store when they are done. 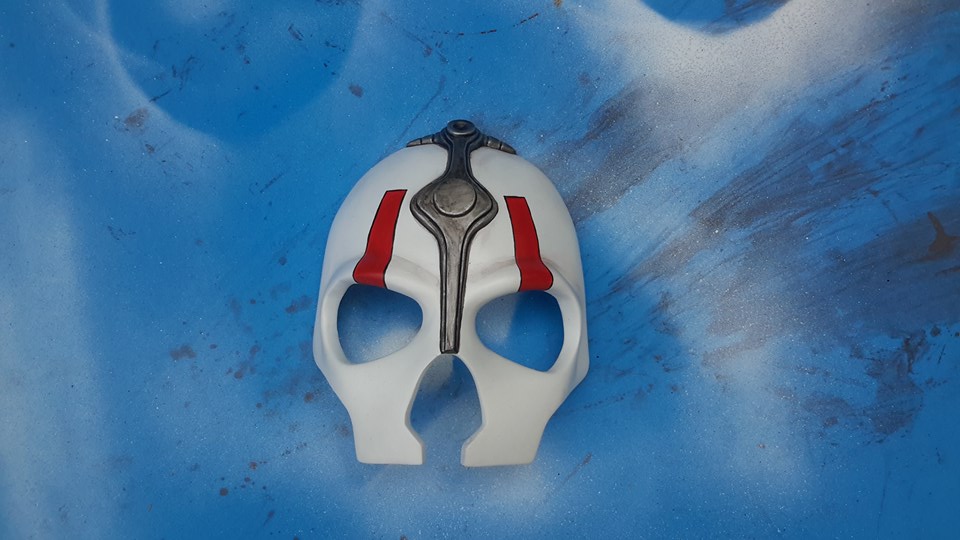 Between doing these casts I painted the mask from the original mould for myself. Rather than the white, I went for a different look, using silver as the base with red markings and black down the centre. Although it wasn’t intentional, when done it reminded me of the colouring of Phasma’s armour from The Force Awakens. 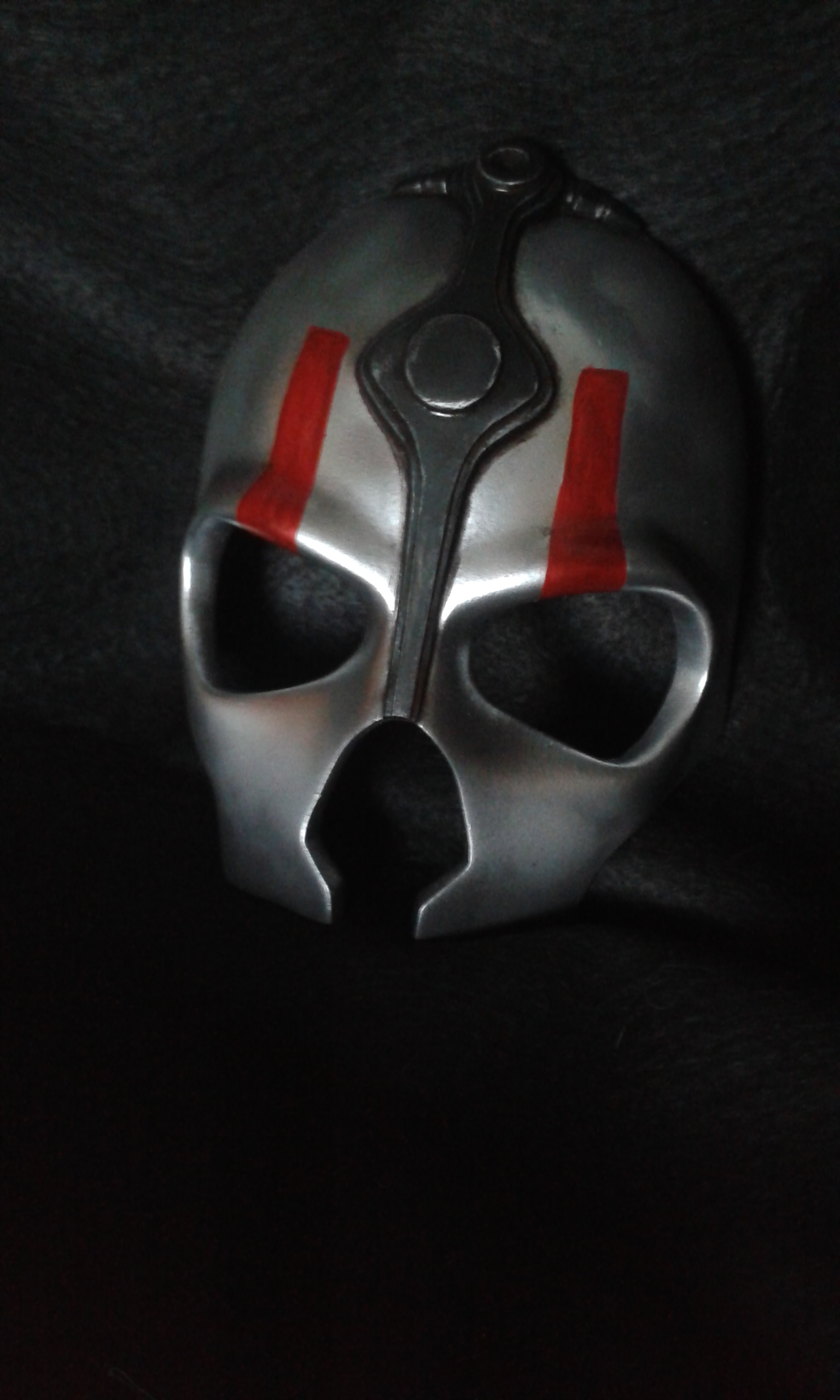 Work is still slowing progressing on my costume. I have managed to speed up the process a little by stuffing the under suit; this makes sewing the bandages on much faster, though it is still a time-consuming process.

I will put up a blog post and on my Facebook page when the masks are ready to go on my store page.

I did some more work on my costume this weekend. First I finished off the waist section and sewed on the 2 layers of skirts.

Next up was sewing the bandages to the under suit. The ones I made last week looked great after drying, but I was having difficulty attaching them since they don’t stretch. It would be easy sew them and make them form fitting if I had a body cast or mannequin. After some thought, I decided to create some more bandages using some left over dye, this time using stretchy fabric I brought for a past project. These could be sewn straight over the under suit, stretch and not be too tight when it is worn.

Since this is going to be a lengthy process I will post progress on my Facebook page. Rather than short blog posts. 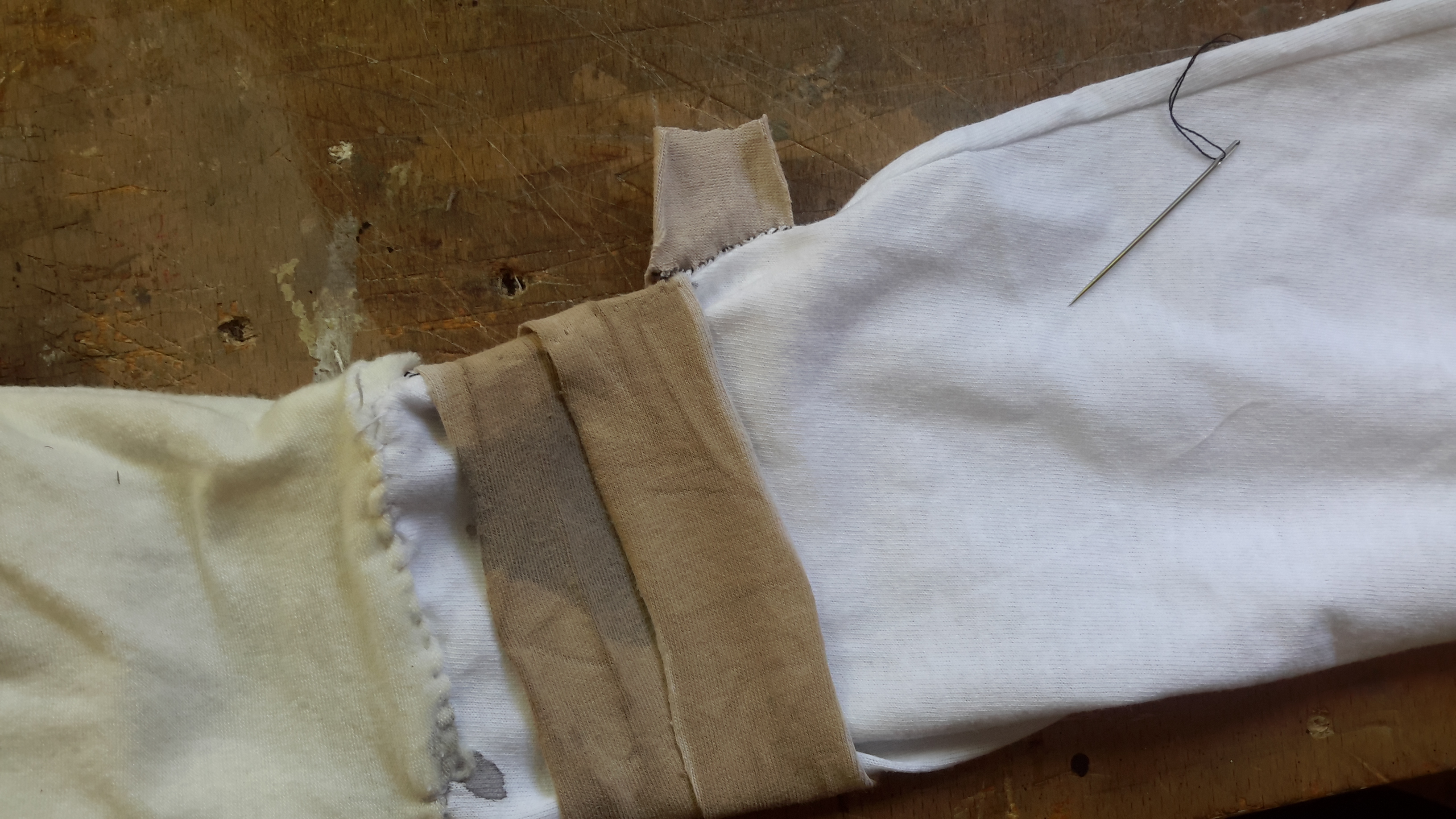 This weekend saw the start of a new project; this time it is new costume. This does not mean I am abandoning my Soliare costume; this is (hopefully) just a quick project I aim to get done in about a month. I will then continue with my other projects, such as the large sculpture I began, the sword which is still printing and moulding the mask with the silicone I brought.

The character is Nox the Time Wizard from a French anime called Wakfu. He is basically a mummy with a few pieces of armour with some light up parts. He does use a sword sometimes but I plan on only doing the costume at this point.

It will consist of 3 main parts:

I began the project by gathering two A4 pages of reference images and then working out anything extra I would need. Searching online I got quite a few bargains, managing to find the parts for the under suit, linen, Velcro, Led’s and coloured acrylic for less than £50 ($67). 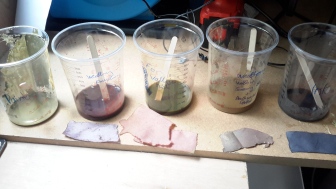 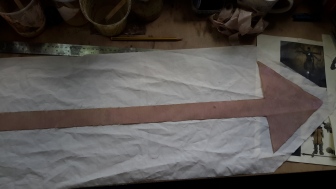 Everything arrived ready for the weekend, which was spent cutting up linen for bandages, testing dyes and then staining the bandages. I also created the loin cloth, sewed the under suit together and started work on the ‘belt’ that would support the loin cloth and skirts. It’s off to a pretty good start.